It is unexceptional a necessity to acquire an in-depth knowledge of China’s strategic thought process and systems besides her geography and history while dealing with the ‘Middle Kingdom’. The strength and weaknesses of civilisation are made up of its philosophy, culture and characteristics of its people and their way of doing things over the centuries. Unless we understand the Chinese mind and contemporary ideology and the mind of their leadership how can we successfully handle them? In the 1950s and 60s, the Chinese thoroughly outwitted our leadership and its advisers by making them believe that our boundary dispute would be settled peacefully by negotiations and dialogue, whereas they were secretly preparing to cut India to size and ‘teach us a lesson’. Ranged against a naive idealist like Nehru were hardcore pragmatic and devious communist stalwarts like Mao Zedong and Zhou Enlai. Nehru and his advisers miserably failed to read the minds of these earthy veterans of the long march, Korean and Vietnam wars. Chinese leaders display no qualms while changing goalposts as far as boundary claims are concerned or dishonouring treaties which are not convenient, and further make the world believe that the process of ‘territorial expansion’ by China should be considered as one of unification rather than conquest.

Despite China’s historical self-confidence that is unique in the present era it may or may not be able to handle spontaneous public outbursts or simmering unrest like what happened at Tiananmen Square or what is currently taking place in Hong Kong, Tibet and Uighur province. The information technology, print and electronic media in China and in its neighbourhood, and social media within and among the Chinese diaspora, have made it difficult for an opaque communist nation like China to conceal facts or suppress public opinion which they had been accustomed to since they became a nation-state in 1949. This has resulted in voices being raised, surprisingly amongst the People’s Liberation Army (PLA) too, albeit in a muffled manner at the present moment asking that the people ought to be told the truth and details of events and incidents that take place in the country.

As articulated by Jagat Mehta a former Foreign Secretary who was an authoritative China hand, ‘Just as China never bothered to understand the working of a democratic [system], India never followed carefully the impact of domestic debate inside China’. My understanding is that while India since the British days has been an open book the vulnerabilities of which the Chinese mandarins have long mastered and exploited, and are still doing so, India has not been able to fathom the depth or get into the inner recesses of the Chinese system. This lacuna needs to be rectified and we need to have many more Mandarin-speaking China experts with the desired level of knowledge of the country, its demographics and its political system. The R&AW needs to have better sources embedded in their system to be able to forewarn India of potential aggressive actions by the Chinese and dedicated satellite network to keep a constant watch along the frontiers.

Supporting the above argument we could take examples from the recent crisis along the Line of Actual Control (LAC) between India and China where the adversary was able to successfully conceal the intent and surprise us to some extent. One is at a loss to determine at what level and who ordered the construction of the road that resulted in the Doklam stand-off in 2017 or for that matter the current Chinese build-up and provocative actions in Ladakh and Sikkim. In the case of India, the task of Chinese diplomats to decipher the Indian response and likely future courses of action is simplified because of availability of analyses and reports, at times inaccurate or irresponsible, by the free press, a frenetically energetic electronic media, opposition parties and statements of leaders of various hues. Curiously, Xi Jinping hasn’t uttered a word on the serious situation which has developed along the LAC consequent to the bloody encounter albeit without the use of firearms (sic) that resulted in a large number of unnecessary casualties on both sides. Furthermore, whereas India has made it known to the world that there were 20 fatal casualties including a commanding officer in the scuffles,  fisticuffs in a free for all using spiked batons, sticks and knives, the Chinese are yet to declare their losses. They are unlikely to do so for years going by the precedent established at the end of the Sino-Indian border war of 1962 and later the Sino-Vietnamese conflict during 1979.

Xi Jinping’s China that we are now dealing with has the stamp of his ‘key thoughts’ on ‘socialism with Chinese characteristics for a new era’ which have now been incorporated in the Constitution of the Communist Party of China (CPC), alongside the thoughts of Mao Zedong and Deng Xiaoping. In his address to the highly selective audience at the nineteenth National Congress of the CPC in 2017, Xi was sanctified as the ‘core’ leader with a limitless term as president of China. He waxed eloquent on the ‘Chinese dream’, on the rejuvenation of the nation, and spelt out the two ambitious centenary goals being aimed at by new China. The first was to build a moderately prosperous society by 2020, and the second, to transform China by 2049, the Republic’s hundredth anniversary, into a ‘great modern socialist country that is prosperous, strong, democratic, culturally advanced, harmonious and beautiful’, and also into a ‘global leader in terms of composite national strength and international influence’. These ambitious objectives could perhaps now be difficult to achieve because of the impact of the Corona pandemic and coupled with it the possibility of border tensions escalating to a large scale border skirmish or limited war between the two Asian giants and the continuing hotting -up of the South China Sea region and Taiwan. Besides these one has to consider the effect on the Chinese economy due to the anti-China sentiment and the boycott of Chinese goods and Apps and stalling/cancellation of large contracts of companies including Huawei in many countries. Gordon G. Chang, a noted China expert, has argued that  “China has reached the limits of its power, and in the ordinary course of events would be starting down a decades-long slide into weaknesses”(the WEEK Aug 9, 2020). How true this assessment is only time will tell, although it is clear that everything does not appear to be unravelling as conceived by the Chinese leadership.

The continuing face-off in Ladakh where the Chinese have not yet vacated the transgressions, for example in the Pangong Tso lake and Depsang plain areas is in my opinion likely to be a long haul and neither side appears to be ready to acquiesce at present. The Indians have sent a strong message to China that it will not budge until the status quo ante as obtained in April 2020 is actually restored. At last, we seemed to have understood to some extent the language the Chinese understand- strength begets respect. The trust deficit is at an all-time high basically on account of China’s aggressive overtures and actions. Violating all agreements mutually evolved and sanctified to ensure peace and tranquillity on the border, the Chinese moved a division-sized force with armour, artillery, missiles etc. and attempted to occupy dominating ground along the LAC during May 2020. They were stopped in their tracks by the rapid and robust response of the Indian Army and given a bloody nose in the scuffle that took place in the Galwan valley. The world did not buy their ridiculous argument that Indian forces were the provocateurs! Therefore, the question of our taking their word at face value does not arise and as a consequence, we have to remain alert and on guard all along our northern frontier.

This inadequacy of expertise in reading the Chinese mind has still to be overcome, and our leadership along with their advisers must get themselves thoroughly acquainted with the nuances and finer points of Chinese national strategy. We must develop the capability to foresee and pre-empt the mal-intentioned aggressive designs of China. It is time for a wake-up call for our intelligence agencies and their capabilities particularly as far as satellite coverage and expertise in image interpretation are concerned which are ought to be enhanced appropriately. Our leaders need to be competent enough to comprehend and handle China matters, and thus to effectively engage with China and resolve the vast array of issues that confront the two nations, the boundary dispute being the foremost.

Although India has effectively conveyed to China that psychological pressure will not work by the firm and resolute response both at Doklam and at Galwan, we need to urgently address areas of weakness in the domain of defence. Instead of knee-jerk acquisition of weapon systems as we witnessed recently, we need to systematically modernise our armed forces and acquire the desired capabilities. We have to enhance our defence budget to around 3% of the GDP for the next five years so that we can meet our minimum inescapable requirement of arms and munitions and are not found wanting in a worst-case scenario of a two-front war. With an environment justifiably tilted in favour of India, we could make known to our potential adversaries in unambiguous terms that any aggression or misadventure would not only give them a bloody nose militarily but also be prohibitively costly diplomatically, economically and politically. Today India stands inspired to do so. 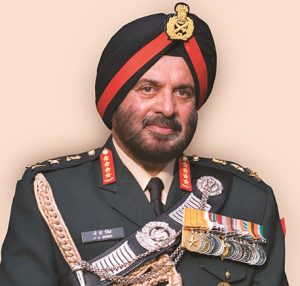 General Joginder Jaswant Singh, PVSM, AVSM, VSM, (Retd) was the 22nd Chief of the Army Staff of the Indian Army. Gen JJ Singh was also the former Governor of the state of Arunachal Pradesh.

Cross-Border Migration May Lead to Resurgence of Insurgency in Manipur: A New Security Challenge for India